upon discovering a wildflower near his home

I was born and raised in Pittsburgh, PA. During my early childhood I had a few experiences that shaped my life; a nightmare where our world became so wasteful our planet became overrun with waste and, my first encounter Mother Nature (Earth).

OUR LIVING PLANET, OUR ONLY SOURCE OF LIFE IS DYING FAST

Bill believes we are obligated to live responsibly, just and sustainably as our natural world requirers! 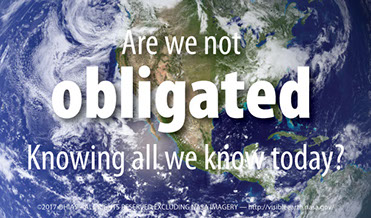 I would like all children to inherit a world with no less chance of living a naturally healthy life. Today with our great and growing numbers and our unsustainable consumption we are fast destroying the remaining life-sustaining fiber and fabric (capacity) of our finite natural world. Scientists have issued two warnings to humanity, so we now know, yet we are continuing to do far too little to address how we live, hoping science, technology and or the government will somehow save us. It is us, and how we live, that needs to change for the greater good of all people and planet. If you believe as I and others have agreed, please AGREE with us, and become a messenger of change and hope for all life and our children's future especially. Thank you!

Bill was born and raised in Pittsburgh, PA. until his family moved to Florida and where he attended high school. Following high school, Bill returned to Pittsburgh to attend art school while working in the steel mills. During his early childhood in Pittsburgh he had two experiences that shaped his life; a nightmare where our human world became so large and wasteful, it became more unhealthy and deadly than alive, and his first encounter Mother Earth.

As he grew and would hear of all the great and growing loss of life and life-sustaining natural capacity, continued unjust treatment of people and planet, it eventually became apparent that he needed to address the threat as he saw it, and attempt to communicate its REALITY for our children’s sake and all life on Earth.

PLEASE AGREE WITH OUR MISSION AND WORK IF YOU HAVE NOT DONE SO —THANK YOU!